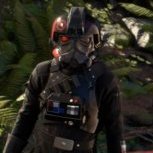 Actually, it's all bullshit. My brother used to know Slenderman, they had this awesome rock band when my brother was younger. You should have seen it... an, this guy could make a damn good Slenderjam.